“We’ve been calling for ambitious growth and better funding for good management of Queensland’s protected areas. This is a good start and we’re keen to see more,” Riley said.

“It’s been a tough time for Queenslanders so it’s great to see some good news.”

Queensland’s national parks estate is now roughly the size of Tasmania. The nature refuge network on private land now totals over 4.47 million ha with a new total of 534 nature refuges in Queensland.

Rungulla National Park is notable among the park extensions. Totalling 1,563 ha, this outback park in north western Queensland features spectacular sandstone formations including caves and the wide Gilbert River. The park has a diversity of landscapes, ecosystems and a range of important cultural heritage sites on the land of the Ewamian Traditional Owners. The river and permanent springs in the park provide refuges for wildlife, especially as the water holes shrink in the drier months. 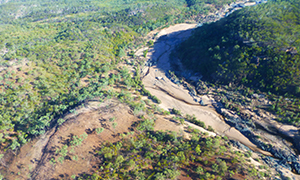 Caloola is about 15 kilometres south-west of Cooktown and has 20 kilometres of frontage to the Annan River, within the Great Barrier Reef catchment. Professor Stephen Williams, Biodiversity Scientist  from James Cook University, says the area is “the most biodiverse location in Australia”. It is no surprise then, that Caloola is home to at least eight plant and ten animal species that are threatened by extinction or in decline, including a population of at least 80 (endangered)  northern quolls (South Endeavour, Biodiversity survey 2017). Caloola adjoins the Annan River (Yuku Baja-Muliku) National Park, Kings Plains-Alkoomie Nature Refuge, the South Endeavour Nature Refuge and the nearby Black Mountain National Park. The Yuku-Baja-Muliku Aboriginal people are the traditional owners of the area and have a long history of traditional use and occupation here.

Queensland has more plant and animal species than any other state in Australia. We’re home to 70% of Australia’s mammals, 80% of its birds and more than 50% of its native reptiles, frogs and plant species.

The extraordinary diversity of our species and landscapes means we carry an immense responsibility when it comes to nature conservation.

A growth in well-managed protected areas is one of the best ways to safeguard nature from feral animals, invasive noxious weeds and uncontrolled wildfires.